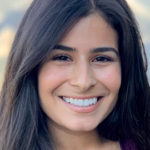 Stephanie Miranda grew up in Orange County where she joined the dance team in middle school and high school. She later pursued her Bachelors degree in Cultural Anthropology at the University of California, Santa Barbara. There, Stephanie discovered her passion for learning about different cultures and human universals that tie everyone around the world together. Music is one human universal that every cultural possesses, and it happens to be Stephanie’s favorite. She loves all genres of music and never fails to join you in a sing-a-long or duet. Along with her love of music, Stephanie enjoys watching cooking videos and traveling whenever she can. She spent a semester in Europe where she learned about different foods, music, and community. Stephanie is beyond excited to be a part of the Stagelight family!