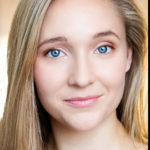 Rebecca Butkivich is graduate from the Bob Cole Conservatory of Music, CSULB where she majored in Vocal Performance with a focus in Opera. Born and bread in a competitive dance studio, Rebecca found herself drawn to Musical Theater where she could include both her love for dance and singing. Since graduating college, Rebecca has continued to build her repertoire in Musical Theater. This includes, Annie as Grace Farrell, Chicago as Hunyak, Little Night Music, Mary Poppins, Bonnie and Clyde, and many more in the Orange County Area. She has also graced the stage with fellow Staegelight teacher, Phil Nieto in Sweeney Todd and A Funny Thing Happened on the Way to the Forum. In addition to performing on the theater stage, Rebecca has also found a stage to perform on in the spin studio as an instructor for Union Ryde, fitness trainer for AKT as well as entertains children as various characters for Lexi’s Little Princesses.