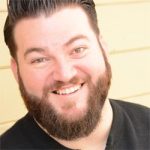 Phil Nieto is a handsome and mysterious man. If you would like to know more about him you should take him out to dinner sometime. He enjoys meats of most any kind. A graduate of the Conservatory Program at The Second City, Hollywood, Phil learned improv and sketch from some of the very best. He’s been involved in several shows there, sketch and improv alike, as both a writer and actor, including The Really Awesome Improv Show, Ruiz Must Die and Picture Show: The Show!, among others. Phil performs bi-weekly with his improv team Fancy Hobo at various locations around Orange County, and can also be seen performing with his long form musical improv team, Fancy Cookin’, and in special events with Spectacles Improv Engine in Fullerton. Finally, Phil would like to impress upon all of you just how much he abhors writing about himself in the third person as it makes him feel pretentious and silly.

Improv is an odd but wonderful art form. There’s always a bit of a thrill knowing that you have an audience that expects something wonderful and hilarious from you yet having absolutely no idea what that thing is going to be when you walk onto the stage.  It can be daunting. But it can also be the most fun you’ve ever had. You have complete freedom to build whatever world you want and to be whoever you want in that world, and to share that building experience with other builders and a crowd of onlookers. Improv has played a huge roll in my life, with the relationships I’ve forged through it lasting for years. It teaches and rewards listening, acceptance, intelligence and wit. Because, as Del Close said, ‘The more you know, the more you can make fun of.’ ~Phil