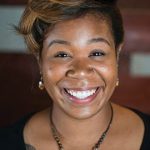 Born in San Antonio, Texas, Paige Williams has traveled the world experiencing countless cultures and music styles. Growing up with two parents active in the Military definitely made life complicated but solidified the strength within her family. They were, and still are, always encouraging her to push the limits and never give up, placing her in nation-wide music and acting competitions as well as funding trips to tour with different choirs around the world.

Eventually, her parents retired and her family settled in the small town of Hoschton, Georgia.  It wasn’t until Paige started to attend college that she followed the footsteps of her iconic older brother and moved into the city.  While getting acclimated to Atlanta, she won the Georgia State Idol singing competition as a freshman, sang with the Atlanta Ballet, and as a member of the supporting choir for Andrea Bocelli. After an eventful college career, Paige graduated Magna Cum Laude with a Bachelor’s Degree in Vocal Performance from Georgia State University and has been teaching and performing ever since; deservingly earning the title of an “ATL-ien”.

With this internationally educated influence, she has grown to be proficient in voice, cello, guitar, piano and ukulele. Paige released her first EP in May of 2017 which includes musical mixtures of pop, alternative, acoustic and R&B.  In hopes of spreading her music world-wide, she continues to display that confidence and expression are essential to the growth of genuine musicality.