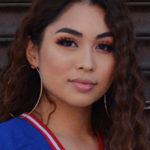 Kathleen Dizon started dancing at Age 7. It wasn’t until she started performing on stage that she realized she had the passion for dance. At age 9 she auditioned and danced for the Golden State Warriors Jr. Jam Squad and continued to be a part of the group for 3 NBA seasons, from 2008-2011.  During that time, she was invited to dance for the Oakland Raiders, Kristi Yamaguchi, the San Francisco 49s, just to name a few. At age 15 she became a teacher’s assistant for David King at Dance Connection Performing Arts Center.  She started taking Master Classes at Chapkis Dance Family in 2013 and 2 years later she took on the role of Co-Director of Chapkidz and Assistant Choreographer for Prophecy by 2017. Being a part of Chapkis Dance Family  allowed her the opportunity to the dance on Americas Got Talent, judging and teaching several times at different dance studios and dance conventions in Europe, being in Daddy Yankee’s newest video “Con Calma” and many more. As co-director of Chapkis Dance Family, she credits much of her success to Greg Chapkis, as he helped open so many doors for dancers at Chapkis. For Hip Hop Internationals 2016, Kathleen was part of Chapkidz Varsity under Melvin TimTim that he later turned into S-Rank. Kathleen currently lives in Southern California and is attending California State University Fullerton and is currently part of a dance group called Gen Z.